Skip to content
FREE US SHIPPING on orders over $100!
local pick-up is available at checkout

For Women’s History Month, we want to introduce you to an influential political figure in modern Chinese history - Soong Mei-ling 宋美龄, also known as Madame Chiang Kai-Shek or Madame Chiang. 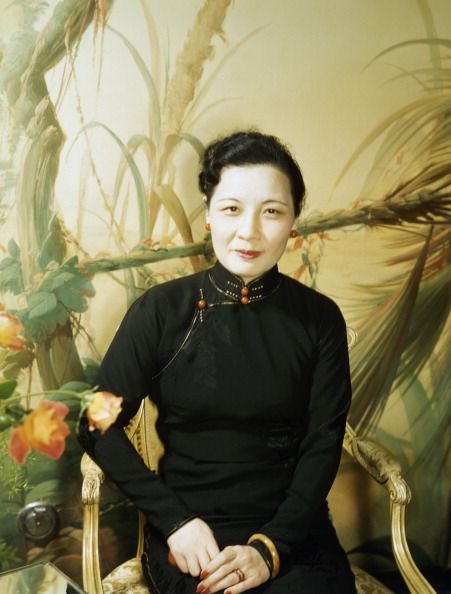 Soong Mei-Ling was the First Lady of the Republic of China from 1948-1975. Her husband, Generalissimo Chiang Kai-Shek, was the leader of the Kuomintang (KMT / Nationalist Party). Mei-Ling came from a wealthy merchant family. She and her two sisters Ai-Ling and Ching-Ling were all educated in the US at a very young age. The Soong sisters’ marital choices eventually ended up complicating their relationship, sending the three on diverging paths.

During the Second Sino-Japanese War, Soong Mei-ling rallied in and outside of China against the Japanese invasion. In the picture below, she holds a speech in front of 10,000 Chinese women on International Women’s Day (March 8, 1939, Chongqing, China). In her up-raised hand, she holds a silver chain, a gift from an Indian woman to China’s war chest. Drives to collect jewelry were common during wartime. For women in traditional societies, jewelry was a common valuable possession. The act of giving up jewelry was a sign of women mobilizing their wealth for the nation.

Coming from a wealthy family, Mei-Ling had a great love for jewelry. Her prized possessions include several invaluable jade jewelries and a giant pearl owned by Cixi Dowager, which she wore on her shoes at her wedding. In 1943, Mei-Ling conducted an eight-month speaking tour of the United States of America to gain support for China’s fight against the Japanese. She became the first Chinese national and the second woman to address both houses of the US Congress. She drew crowds as large as 30,000 people and in 1943 made the cover of TIME magazine for a third time. Madame Chiang Kai-Shek on the cover of Time and LIfe.

Her visits left a lasting impact. After her trip to the US, the United States Womens' Army Corps recruited a unit of Chinese-American women to serve with the Army Air Forces as "Air WACs", referred to as the "Madame Chiang Kai-Shek Air WAC unit". Less than three years after her North American tour, Japan’s surrender ended World War II.

Mme Chiang Kai Shek addresses the House of Representatives in 1943.

After the defeat of her husband's government in the Chinese Civil War in 1949, Madame Chiang fled with Chiang Kai-Shek to Taiwan, while her sister Soong Ching-ling stayed in mainland China, siding with the communists. In 1975, she emigrated from Taiwan to her family's 36 acre estate in Lattingtown, New York. The estate was sold for 1180 USD. Madame Chiang died in 2003 at the age of 105.

Although reviews of Soong Mei-Ling are mixed, it was indisputable that she was a well-versed, charming woman with an incredible sense of style.

Her obituary in The New York Times reads:

As a fluent English speaker, as a Christian, as a model of what many Americans hoped China to become, Madame Chiang struck a chord with American audiences as she traveled across the country, starting in the 1930s, raising money and lobbying for support of her husband's government. She seemed to many Americans to be the very symbol of the modern, educated, pro-American China they yearned to see emerge—even as many Chinese dismissed her as a corrupt, power-hungry symbol of the past they wanted to escape.